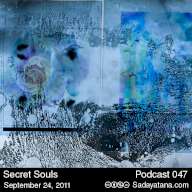 This was a fun show. One of my best ones I think. Straight dark ambient with some noise and soundscapes.

Couple tracks from Mystified's as yet unreleased "Drifting". Actually it was released in 2007 for sale on recycled cassettes, but coming out again soon on Buddhist on Fire as CC music.

Backyard Ghost again. Played these tracks on "Calm, Happy Whispers", and listening to it later, it felt like I needed a seatbelt. Backyard Ghost rocks (in an ambient way of course...)

Played some music by Argentinian noise artist Playing With Nuns. The listener count on stillstream.com seemed to drop off as I did so. Maybe they thought it was technical difficulties with the stream. Their loss. So awesome.

Some excerpts from Luis Antero's fantastic field recordings. What a great ear he has. Good gear too apparently.

Snuck in some tracks from The Implicit Order. More of his newer releases later. So good this guy's music. Great samples.

I think you will enjoy this as much as I did. I got into doing the show so much there was no voiceover until the end, but then I chopped that off as well. So it's the first podcast where there is no voiceover interruption... Happy listening.